June 13, 2019 – Second update by the Coalition for Responsible Sharing on ResearchGate’s copyright compliance status. The first update can be found here.

The Coalition for Responsible Sharing (CfRS) was formed in October 2017 to address the copyright-infringing practices on ResearchGate’s site. The CfRS represents 17 society, not-for-profit and commercial publishers and information analytics businesses and is working towards a solution that is in the interest of all stakeholders – ResearchGate, publishers and researchers – and consistent with access and usage rights. When the CfRS was formed, analysis indicated that approximately 7.7 million copyright-infringing articles were made available on ResearchGate’s site, for all publishers (Source).

Shortly afterwards, ResearchGate removed approximately 1.4 million – or 92 percent – of illicitly distributed articles on its site that were published by CfRS members.

(For publishers outside the CfRS, in contrast, only 20 percent of their content that ResearchGate illicitly distributed was moved from being publicly accessible.)

Since the formation of the CfRS, an average of 130,000 articles have continued to be added to ResearchGate‘s site each month, approximately 45 percent of which infringe copyright.

(Unless indicated otherwise, figures in this document are based on estimates from external assessments of ResearchGate’s site for the period from October 2017 to January 2019. As they are not from ResearchGate itself, there may be a degree of error.)

Since the CfRS was formed, almost 1 million copyright-infringing articles have been added to ResearchGate‘s site in total for all publishers. Almost 300,000 of these articles are published by members of the CfRS.

A long-term viable solution has yet to be agreed upon

A long-term viable solution to the copyright-infringing practices on ResearchGate’s site has yet to be agreed upon. This is despite the success the CfRS has had to date, its efforts helping to significantly reduce the number of illicitly hosted articles on ResearchGate’s site. ResearchGate continues to provide access to millions of copyrighted research articles in contravention of agreements between publishers and authors, taking no responsibility for this illicit activity.

ResearchGate has continued to reject all attempts by the CfRS to find an amicable solution, including signing up to the STM’s Voluntary Principles of Article Sharing on Scholarly Collaboration Networks. ResearchGate has also refused to consider implementing a user-friendly technical solution that would process uploads immediately and automatically, indicating to users whether an article can be shared publicly or privately. Instead, ResearchGate insists that publishers send takedown notices for each article illicitly distributed on its site – a needlessly complicated process that is disruptive to researchers, detrimental to its own user experience and it is unmanageable for publishers to monitor any site anywhere in perpetuity. In addition, previously removed copyright-protected articles are sometimes simply re-uploaded.

As a commercial business funded by significant venture capital, ResearchGate depends on the hosting and redistribution of large numbers of articles to generate traffic to its site, which is then commercialized through the sale of targeted advertising. It also modifies articles for the same purpose, and where corrections or retractions are issued, fails to update articles accordingly, undermining research integrity and continuity. 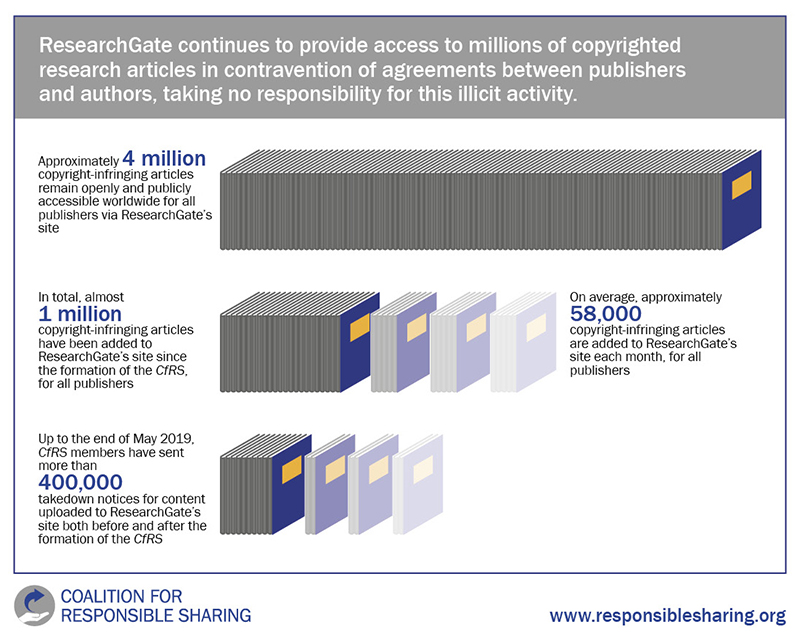 What we are doing

The overall goal of the CfRS remains the same: We want ResearchGate to adopt a long-term viable solution that respects copyright. That means articles should not be available on ResearchGate’s site at any time without proper permission from the copyright owner or the holder of an article’s exclusive rights.

In light of ResearchGate’s unwillingness to cooperate and the continued copyright violations on its site, the members of the CfRS have been left with no other choice but to take the following steps to try and find a solution:

Further action is required to resolve the issues with ResearchGate, which continues to undermine scholarly communication and the scholarly publishing ecosystem by modifying articles, and where corrections or retractions are issued, failing to update them accordingly. While ResearchGate to date has rejected all proposed solutions from the CfRS, we remain hopeful that a solution that is in the interest of all stakeholders and consistent with access and usage rights can be found.

We encourage publishers to join the CfRS and support the principles of protecting copyrighted material for the benefit of curated and certified science in the future. Since its inception, the CfRS has continued to grow, now representing 17 society, not-for-profit and commercial publishers and information analytics businesses.

The CfRS will continue to work towards a solution that is in the interest of all stakeholders and consistent with access and usage rights. For further information and regular updates please visit www.responsiblesharing.org or follow us on Twitter @CFRSharing.